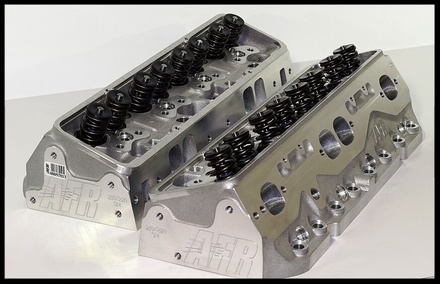 This sale is for a fully assembled set of heads (2 heads).

The springs in this setup are to operate with hydraulic roller cams up to .600 lift.

Our eBay user id is: skipwhite, and our eBay store name is whiteperformance1. You may have noticed other sellers using a similar name offering similar products. These other sellers have capitalized on our name as we see it, and many customers searching for us will inadvertently find them, thinking we are one in the same company. There is only one "Skip White." We are the original premier eBay seller under this name since approximately 2003. We have no other eBay names, nor are we associated with any other company regardless of the similarity in the name or location. Our official company name is Skip White Performance. Please see the article in the lower part of this ad for a more detailed explanation

PICTURED ABOVE ARE OUR FULLY CNC'D AFR HEADS.

The AFR heads are the best aftermarket cylinder heads in the world. Quality, performance, and reliability are excellent.

Below is the flow chart for the AFR 210cc heads. The flow numbers speak for themselves. A cam in the 500 lift range on up to around 600 lift would be a very good match for these heads.

As our company founder explains it, the results you experience with the AFR heads will vary greatly by what type setup you are running. The engine combos we have dynoed are what most people have chosen to use as far as cam and intake selection goes, and we have some of the results listed below. The engines dynoed with the 210cc heads were mostly sbc 421, 427, and 434

engines in the 10:1 to 10.5:1 compression range, give or take. We also did an aggressive 406 build with the 210 heads. Normally, we use the 195cc heads on the 406 but found the 210's suitable due to the cam size of this one particular engine. All run on pump gas.
Our 421 through 434 engine ads have a selection of four different cams and these engines all come with AFR heads. This has given us a great opportunity to see how they performed. We were able to test several different cam setups with these heads. This will give you an idea on what these heads are capable of with a given combination of cam, intake, rockers, and carb. This may also help you select a proper cam for your build.

I'm sure many of you have noticed there are 2 high performance engine builders in Kingsport, TN with similar names, leading to a great amount of confusion.

Due to the name similarity, many customers looking for us online inadvertently find them, thinking we are the same company. Definitely not...there is no connection between the two companies. We don't have a problem with free enterprise (competition). However, when the competition builds their foundation on such things as a name similarity and their supposedly long history of being in business, then we think it's about time we set the record straight.

We have owned White Performance since 2003, with the exception of the machine shop, which was owned by Fred White at the time. He continued to operate the machine shop and build engines for us while we continued selling online under the eBay user ID of skipwhite and the eBay store name of whiteperformance1.

Due to their limited production capability and many disagreements about the engine and head building process as well as workmanship, we opted to open a full scale machine shop of our own a few years later. Fred White began competing against us even though our contract had a non-compete clause in it.

As our business grew, we opened a second, much larger warehouse and machine shop around 2011, located on Brookside Ln. in Kingsport TN. By putting heart and soul in this company, we have become the number one street rod engine builder in the nation.

Fred sold his shop to an investor in 2016 and the new owners continue to reap the benefits from this confusion between the two shops. This investor lacked any knowledge of this industry. They continue to use the White Performance & Machine name. Contrary to what is posted on their website, Fred White is no longer associated with the company in any way. Their main spiel in advertising is, "In business since 1979," when in fact, we purchased the White Performance company in 2003, with the exception of the machine shop.

All in all, we have been in this business going on 17+ years. Skip White's passion has been owning and building street rods for 47 years on a personal level. The knowledge he has gained over time has allowed him to venture into this business and succeed to a very high level.

The great pretenders continue capitalizing on our success due to the name similarity, but have been degrading our reputation. We have been getting calls nearly on a daily basis from people that now realize there are two shops in this town with very similar names. Customers complain of serious problems in getting their orders in a timely manner from them. They think they purchased their cylinder heads from us. Due to the confusion, there is an increasing amount of negative feedback that is affecting our name within the street rod community, when in fact we have a near perfect reputation in this industry. We have an "A+" rating with the Better Business Bureau and we have maintained the A+ rating for many years.

FAST FORWARD TO PRESENT DAY...We have become the largest street rod engine builder in the nation. Our engines, rotating assemblies, and cylinder heads are built to very high standards and shipped to our customers in a timely manner. We are a premier seller on eBay with a positive feedback score of well over 206,000 and growing, as compared to our competitor’s score of approximately 24,000.

Our engines are custom-built to our customers' specifications and are shipped in approx. 2-5 weeks, perhaps sooner, depending on the season. Our rotating assemblies usually ship out in about one week or less, and our heads ship in about a week or less.

This product does not have any reviews yet.